It is scarce to discover something new and unprecedented on the London dining scene. But Roketsu in Mayfair claims to be just that – the capital’s initially genuine Japanese kaiseki restaurant. Kaiseki derives from Buddhist tea ceremonies and is a official meal consisting of a dozen or so meticulously organized dishes served in a approved get that showcase elements at their peak seasonality. It is viewed as the maximum kind of Japanese delicacies. Roketsu’s chef Daisuke Hayashi is a grasp of kaiseki who skilled in Kyoto beneath one more learn, Yoshihiro Murata – the gentleman with 7 Michelin stars to his name who gave Rene Redzepi and Heston Blumenthal their grounding in Japanese meals.

Fishy custard designed from Scottish diver scallops, ginger and bottarga felt like a warm hug from the inside

Kaiseki is most common in Japan but there are exceptional variations somewhere else (albeit incorporating western twists). These contain Odo and Shuko in New York and Hayato and N/naka in Los Angeles. In London, kaiseki utilised to be available at (now shut) Sake No Hana in St James and Chrysan on Broadgate West. But neither was authentic, says Hayashi, who labored at both equally. He calls their tactic “fusion”, in that, for occasion, at Chrysan the meal followed the French fashion with amuse-bouche, meat and fish courses. Now you can buy a kaiseki menu at Umu on Bruton Location, but it also will come as an solution along with à la carte. Roketsu, by distinction, gives only kaiseki, and its reliable strategy extends further than the suave arrangement of food on the plate to all factors of the design and style, such as the dining area.

This adheres to the “sukiya” (tea area) custom with lattice screens, shoji lighting and a Japanese cypress counter that seats 10, with a most of 16 diners for each night time (a private dining room also seats six). It is like eating in Kyoto, claims Hayashi. And unquestionably you feel transported. The only non-Japanese things are the Danish chairs and numerous of the ingredients, which are sourced locally for freshness in keeping with kaiseki thinking.

I was expecting the meal to be prolonged and austere. (“I have lots of customers who take in for numerous hrs without a single term to every single other or any person else,” Murata has reported of the working experience in Kyoto). But if the patrons at Roketsu remained mostly mute (which includes myself), it was far more out of a feeling of marvel as we watched the comings and goings guiding the counter of two cooks, the sommelier and two women servers, who wore pink slip attire beneath black blazers.

The atmosphere felt really ’80s, as did the soundtrack of classical finest hits. The benign mood kicked in with the 1st (sakizuke) class, a restorative broth and fishy custard created from Scottish diver scallops, ginger and bottarga that felt like a warm hug from the inside. The follow-up (hassun) course set the seasonal concept for my go to in February with beautiful sushi-like bites of sardine, wild rocket, prawn, burdock, trout and herring roe marinated in sake lees. Another highlight was a bowl of squid, sea urchin and egg yolk/soy sauce that resembled a carbonara. The deep-fried rice-cracker-crumbed monkfish was seductively moist and fish-and-chip-stage delicious in a gluey turnip soup. 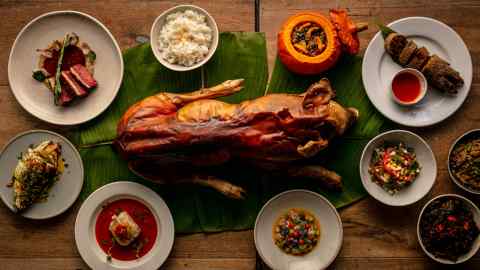 The meekness of particular other dishes had me hunting for additional jolts of flavour. The sunomono, a vinegary training course intended to cleanse the palate, consisted of a Jersey oyster doused in celeriac purée and tomato drinking water with Oscietra caviar. It tasted overwhelmingly – and uninterestingly – of celeriac and failed to jivy me up one particular little bit. But these disappointments ended up redeemed by the comfortingly sticky crab rice in the penultimate (gohan) class and a fruit jelly dessert with yuzu sorbet that fizzed with citrusy zest. Billed at two and a half hrs from start off to complete, my meal only took two, which seemed about proper. The food may well have been authentic to Kyoto, but the tempo was correctly London.

the arts of razaris
We use cookies on our website to give you the most relevant experience by remembering your preferences and repeat visits. By clicking “Accept All”, you consent to the use of ALL the cookies. However, you may visit "Cookie Settings" to provide a controlled consent.
Cookie SettingsAccept All
Manage consent